Preamble – Life is full of intriguing questions about day-to-day life for which there are no readily available answers. Like, for example, what would happen to my shopping if I were mown down by a car on the way back from Co-Op? Would my cans of Value Beans and the roll of extra-strong bin liners merely be left at the side of the road, or would they be packed off with me to the morgue? And if they were to be retained, at what point would the authorities ask my (hopefully) grief-stricken relatives if they’d like to keep the bin bags? Can you imagine being the liaison officer tasked with that one? ‘Yes, he is a bit of a mess. We’re still looking for his right arm. Still, look on the bright side – there was buy-one-get-one free on beans. He died doing what he loved.’

Being a Boston fan ensures questions of such morbid banality are churned out on an industrial scale on a weekly, nay, daily basis. And the answers factory clearly can’t meet demand. This week saw another pretty hefty catch:-

Adam Smith. What’s that all about?
Why are we banging balls long to Stevenson?
What’s Tony Crane’s problem, exactly?
Ben Saunders: shot, cross or frustrated punt?
Are the Conference going to nail us for AussieGate?
Questions, questions, questions – with nary an answer to be heard. Well, apart from, perhaps, the Sanders question. That wasn’t a shot from where I was sitting. If you feel like you have the answer to any of the above, please do feel free to drop .

With their continuing away-day traumas and having had the home bubble burst on Wednesday night, Boston’s season is now delicately poised. Since they’re out of the cups (and is anyone genuinely optimistic about the Trophy?) the Pilgrims are in real danger of having to endure a quite miserable post-Christmas aimless kickabout. But the division is sufficiently competitive to keep things interesting until the death – but only if Boston start picking up more points away from York Street.

That lot – Camped firmly in mid-table, Stalybridge have every right to feel confident ahead of today’s game. They’re a hard team to write anything interesting about, because there’s not a huge amount to say about them that doesn’t fall into the trap of spouting tedious rubbish about how ‘hard working’ and ‘organised’ they are, and so on. Er. So that’s it.

Facts – Striker Chris Hall is a keen amateur actor, having appeared in a stage version of the Full Monty. Which, if you’re Sun hack and ex-Bigot of the Year nominee Neil Syson, probably makes him a TWISTED sex worker.

Boston’s last trip to Bower’s Fold resulted in a 2-1 defeat for the Pilgrims in the 01/02 season. Sadly we can’t find the after match audio in which Steve Evans probably called Scott Dalton a ‘fucking numpty’ and blamed John the Baptist for the loss.

impsTALK prediction: If Boston can be arsed – a 2-0 win. If they can’t be arsed, which on recent form is most likely, expect to see United going down in flames – 3-1 to Celtic.

Links – If neither Scott Dalton or impsTALK are doing it for you, you can tune into Celtic’s very own minute by minute account of events at Bower Field HERE. impsTALK will itself be watching this service very closely indeed, if only to correct the innumerable factual errors within its own report that often go unnoticed due to the lack of an accurate alternative. Gah!

2.20pm – Moaning Mitchell is cut off mid-flow by BBC Radio Lincolnshire. My licence fee has just paid for itself.

2.25pm – Lee Crockett is ‘ill’, apparently. Which, if Tony Crane’s ‘illness’ is anything to go by, is clearly rhyming slang for ‘suspended pending disciplinary proceedings’. Or, more simply, ‘canned’.

2.35pm – “No Nicholls, not that big a surprise is it?” scoffs Adam. “Also sounds like Crane is to be sacked, shit, shit and shit. WHY TONY, WHY? Also how annoying, finish work just too late to get to the game but early enough to get home and be made to do some DIY. We had better win!”

2 mins – A relief that Talbot is playing given the way he limped off against Hucknall. It looked ominous at the time.

4 mins – ‘They look half decent,’ reports Chris Cook. That’s us stuffed then.

5 mins – Free kick for Boston – Adam Smith takes it, yes, that’s right, Adam Smith. And, astonishingly, he doesn’t spank it off for a goal kick and forces a stop from Gamble. Corner to Boston, but it’s wasted by EBSJB.

8 mins – Free kick for Stalybridge – Wright watches it sail past the post. Quiet start to the game.

10 mins – Oops! Chris Wright shows the touch of Leroy Chambers attempting to control a punted long ball, loses possession and is fortunate to escape with no damage done. And to think! There’s no Tony Crane to go over and ‘encourage him’ with his fists.

12 mins – ‘If [Smith] managed to force a good save, Froggy would have scored it,’ another Adam protests. ‘Time for Ellender to step up to the plate now it looks like Sir Tony might not play for us again.’

20 mins – Really not a huge amount to report. Except Dagenham losing.

22 mins – CHANCE! Froggatt swings a boot and sends the ball sailing over the stand. Well, after his goal on Wednesday night, he might as well.

24 mins – ‘Stalybridge,’ muses David. ‘Weren’t they on that Scottish comedy “Absolutely” where they would forever have council meetings and decide that a road sign would suffice instead of a jobsworth called Henry with a hat that cast authority all over the place? By the way, if Crane was given the sack, would he carry away his pies in it?’ 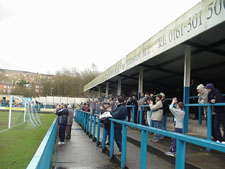 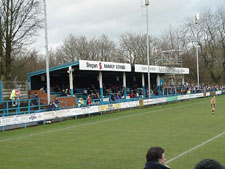 31 mins – Still not a huge amount happening. ‘The player “Smith?”. Is he paying tribute to Irish Altena-Rockers “Therapy?” asks Ian. ‘Or is he being all 10CC with us and being artsy for arts sake?’

36 mins – CHANCE! Out of absolutely nothing, Lee Ellington spanks a powerful shot that defeats Wright and cracks off the post. Let off for Boston! Ellender heads over the bar for a corner.

37 mins – GOAL!!!!! Southport 1, Boston 0
Meechan bundles the ball home after a pretty shoddily defended corner. There was a penalty shout as the ball pinged around, but it matters not as the home side take the lead. Arse! Poor defending. FREE TONY!

41 mins – ‘Sorry, but at the back we are weak, totally lacking in bite and clearly disorganised. They have lost their last four at home so this is a nailed on defeat for us.’ Yes sir, Adam Upsall is not a happy chap. ‘Wonder if that’s the chance of a point gone, hardly heard a comment from Scott or Cookie about our strikers! This really needs to be a game of two halves.’

43 mins – Raking Up the Past with the impsRAKE™ UPDATES #2 – In times of desperation, one need only seek solace from the south of our grand nation. Crawley 0, Torquay 3.

Half-time – ‘You’ll love this!’ Adam Upsall promises me. ‘Got a mate at the Torquay Crawley game, just texted me, they are singing 3-0 to the tax payers!’ He’s not wrong. I do love it.

Half-time – ‘I’m well over 6 foot,’ claims Boris. ‘I weigh 16 stone. I am not quick, but I tackle like being hit by a pregnant hippo. Driving a tank. I’m no Crane, but think I could be a Aldi-Value substitute. Reckon I could get a game at centre back?’

Kick-off! Let’s hope for an improvement. I’ll take anything, anything at all.

51 mins – CHANCE! Liam Green makes a poor attempt at a clearance and Win fires in a shot. Ex-Arsenal legend Chris Wright makes the save, but the pressure is all from the home side. Which isn’t ideal.

53 mins – Froggatt hits a ball well over the bar from close range, but the excitement is quickly snuffed out by the linesman’s flag.

65 mins – CHANCE!! Stalybridge are a fraction from extending their lead, James Dean striking a fizzing shot across the face of Wright’s goal. Frustratingly, Boston aren’t doing anything. Further subs impending – and how they need them.

70 mins – The longer this goes on, the more desperate Boston will become. This will either end up as another Nuneaton, or a Besiktas-style capitulation.

74 mins – Boston should be losing this by more than the solitary goal. ‘Elle to go up front for the last five minutes, 6-4 on. Elle to score 252-1. How are we still in this?’ marvels Adam.

78 mins – Raking Up the Past with the impsRAKE™ UPDATES #4 – At least one club is making a decent fist of clawing their way back. Ugh! Crawley 2, Torquay 3.

79 mins – ‘Adam. I shall come over there and kick you in the shins in a minute. Stop being so negative. Boston to win 8-1. You watch!’ says Ken.

82 mins – Hope springs eternal! ‘This “could” be a brilliant day if we get an improbable goal or two, Dagenham, Lincoln & Crawley are getting beat.’

83 mins – Chris Cook and a spectator almost come to blows in by far the most entertaining moment of this shocking second half.

84 mins – It’s about time Boston United repaid us something. Come on you bastards.

84 mins – Corner! The ball is knocked about a bit, O’Redcardohan tumbles in the area but the ref doesn’t even consider it. Celtic, meanwhile, run down the other end and somehow contrive to not score after a free header at the far post is struck against Bloomer.

88 mins – It’s all Boston, but they’re not creating any clear chances. A cheap foul conceded and the pressure’s off the home side for a moment.

87 mins – Another Boston corner – O’Redcardohan takes it and…… cleared. ARGH!!!

90 mins – Penalty for Stalybridge! Medine hauls down a Celtic player in the box and if this is scored, that’ll be that. Yellow card for Medine. The Boston players crowd around the ref. It’s almost certainly a matter of moments before he accepts their arguments, retracts the penalty decision and awards a goal kick. Eh? Oh.

90+1 mins – RED CARD FOR ROWAN
Rowan is dismissed after having an ‘adult’ conversation with the referee. And I don’t mean the kind you’d have with Picture Loans. Off he trots. Sack him Tommy!

90+1 mins – GOAL!!!!! Southport 2, Boston 0
Ellington sneaks the ball past Wright, and what a horrible, miserable end to a shitty bastard afternoon.

90+2 mins – GOAL!!!!! Southport 3, Boston 0
Erm, well, actually Adam, yes it can. Boston are too busy feeling sorry for themselves and neglect to stop Hall punting the ball past an entirely unguarded and helpless Chris Wright. Shocking.

Last resort – ‘Only thing that can cheer me up now is an Italian win,’ says Adam. Actually, impsTALK will be rooting for a Scotland win, otherwise next summer will be a yawning void on the telly. We might be forced to actually spend time with The Boss.

Raking Up the Past with the impsRAKE™ UPDATES #5 – Not really any kind of consolation, but…. Crawley 2, Torquay 3.

That’ll do – Scotland have just conceded what will probably be the first of many after 68 seconds. Things can’t get much worse. Thanks for your e-mails. See you at Gateshead! Pete

What’s worse than a heartbreak?

@TrailOfDebt I used to watch Boston quite a bit in the seventies with my mate the Pilgrim. The gate was always around 1500 & that was at the level above. Just goes to show the doomsayers (we've all got them) were wrong about the move. Seems like somethings stirring in the south of the county?