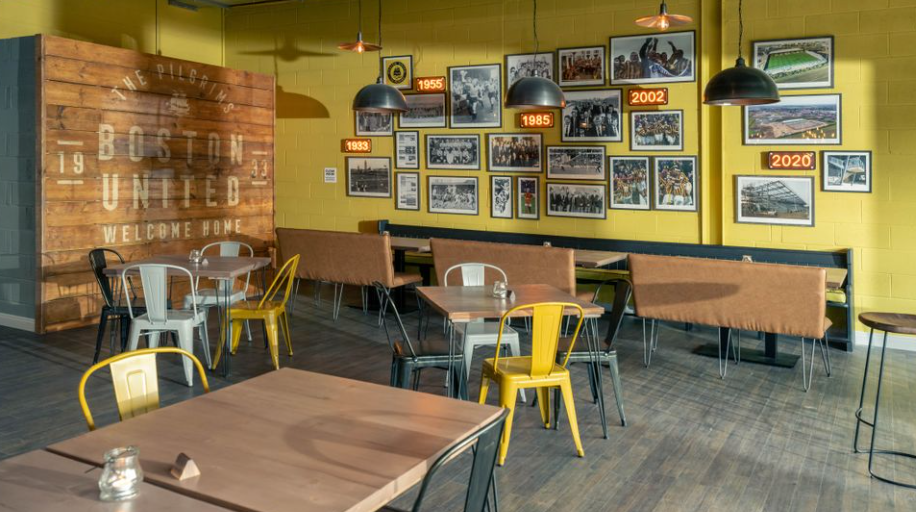 So the pandemic is over and the world is re-opening. About time. This also means football is BACK!

Coming to Boston to watch your side having never been to the new Boston stadium before? Congratulations – you’re in exulted company. No Boston fans have either. So this season is going to be a learning process for all of us. Welcome along!

(TL;DR: Stadium’s great, but you’ve got a longer walk to the ground)

Otherwise known as “The Quadrant“, or if you’re being unnecessarily grumpy about it, “that place that looks like ALDI in the middle of nowhere.”

The good news? It’s a huge upgrade on York Street. There’s a proper club shop (that now even takes debit cards), a posh bistro restaurant that serves stuff on slate with artful swipes of sauce, new hospitality suites (with dedicated private bar) and loads of glass that is going to be a right arse for vice-chairman Neil Kempster to keep clean. Accessibility is also massively improved from York Street too.

The biggest stand of the new stadium the West Stand houses the club’s offices, facilities, hospitality and spanking now wheelie bins. This is also where you’ll find the club ticket office if you have any queries. This stand is all seated and is serviced by two separate bar/snack concourses. The Club 85 banqueting suite is also in this stand, and if you’ve splashed out on one of the club’s dining packages you’ll also have exclusive use of the private Kabia’s bar, which means not having to mingle with the rest of us miscreants. Bear in mind the two sides of the stand are not connected. Use turnstiles W1 and W2 for blocks A-D, and

After fan consultation back in 2013, this was redesigned to be the larger of the terraced stands – but only by a handful of rows. This is likely to end up being the home of the club’s more vocal fans, so expect to see lots of flags. A bar/snack area is where you can get your sausage rolls.

The newest of the stands, having only been completed in 2021. Also has its own dedicated food service area.

The South Stand [NOT OPEN]

This will be the final piece of the jigsaw, bringing with it a sports hall and community gym. And a climbing wall, apparently. The foundations are in but there’s no news on when it might actually get built.

Admission prices have been frozen from the abandoned 2020/2021 season, although obviously no-one ever actually used a turnstile for that. Online ticketing options have not yet been provided.

The club also offers a variety of family tickets. Full details are available on the club’s website here.

The ticket office is located inside the West Stand. Queries can be directed to them on 01205 364406.

Getting To The Ground

The bad news? The location. Whereas York Street was easily walkable from Boston’s train station, with a route that took you through the town centre and its assorted pubs, away fans intending to come to matchdays via the cranky old Nottingham-Skegness service now face a hefty 40 minute walk at this end along frankly hostile and pedestrian unfriendly roads.

Our advice? Head into town for your drinks anyway and order a taxi from there.

Boston doesn’t have Uber, so you’ll need to ring one of our local firms if you want a ride to the new ground.

The stadium is located off the A17 south of the town. Parking at the stadium is available at £3 per vehicle but is very limited, and allocated on a first-come, first-served basis. Please have exact change (or pay by card) – the stewards will be very gateful.

Failing that, there is on street parking in the Quadrant housing development, but please be considerate and don’t block anyone in.

No bus service currently directly services the stadium but there are two routes which are handily placed. Both are operated by Brylaine, and both services are contactless and smartcard enabled.

K58 Boston-Kirton This is the better of the two routes as the bus will stop inside the Quadrant housing development opposite the stadium on Wallace Way. The stadium is just a couple of minutes from there – you’ll be able to see the floodlights. TIMETABLE

B13 Boston-Spalding This will drop you at the top of Tytton Lane East. The ground is approximately a ten minute walk from here. TIMETABLE

Boston is serviced by the Nottingham-Skegness service ONLY. Be aware in late summer this service is used by holidaying families from Nottingham and can get extremely busy indeed. Bring headphones and lots of train tinnies. You’ll need them. Taxi services are available immediately outside the station if you’re not heading off into town to get tanked up.

If you REALLY want to walk to the ground, be aware it  isn’t a pleasant stroll. But, if you insist, you can at least stop at a handful of pubs along the way. The Eagle is about a thirty second walk from the station, but your next available pint will be at The Railway on London Road, probably a 25 minute walk. That’s if it’s actually open – it seems a bit hit and miss. After that, there’s a Spirit of Endeavour, followed by the ground itself. More details on pubs and eating options below.

Let’s be honest, pre-match pints are going to be a bit harder from this season, but there are still a few options around the ground and on the way from the station.

Ellenders Boston United’s replacement for the Pilgrim Lounge and is located at the ground in the West Stand. The modern bar has been outfitted with all kinds of vintage stuff from the old stadium and pays homage to notable moments from the club’s history. Not to be confused with Kabia’s, the bar for hospitality guests which is NOT open for general admission customers.
11.30-10pm Saturdays | The Jakemans Community Stadium, Pilgrim Way, Wyberton, PE21 7NE | Website | 01205 364406 | ellenders@bufc.co.uk

The Eagle Castle Rock brewery pub, located close to the railway station. Popular with Boston fans travelling by train so it can get a tad cosy after games. As with all Castle Rock pubs, the beer selection is superb. The Eagle doesn’t serve food, but they don’t mind if you want to bring in your own.
11am-10pm | 144 West Street, PE21 8RE | Website | 01205 361116 | eagle@castlerockbrewery.co.uk

If you fancy a pre or post-match bite in town, here are a few suggestions….

If you’ve left it too late, there are a number of eating options around the ground: Burger King, Papa Johns, Greggs, Costa and Starbucks all have outlets immediately adjacent to the stadium.

Boston United’s official programme is called The Pilgrim and is available from various sellers in and around the stadium. Price £TBC.

Boston’s only active print fanzine is called Don’t Look Back In Amber and is available via mail order. Follow them on Twitter HERE for more information.

Information about Boston’s history of now defunct ‘zines is available in the Fanzines tab at the top of the site.

Course, it might be that you want to pop to Boston and make a weekend of it, in which case there’s plenty to do. Boston is an underrated gem and while, yes, while certain parts need a bit of TLC and a good scrub in places (just pretend the Assembly Rooms aren’t there) there is history about the place. The tidal river that snakes through the town centre is also a clue that Boston is actually very close to the coast, which means you’re only minutes away from some fresh sea air. Kind of. Let’s see what’s about…

Climb a tall building! The Stump. You can’t miss it. Looming over the town like some kind of medieval Empire State Building, St Botolphs church is a simply astonishing sight from anywhere around Boston and frankly from anywhere within a ten mile radius. It’s as impressive inside as out, so be sure to catch one of the guided tours or, if you’re not averse to climbing lots of stairs in a narrow stone funnel, you can climb halfway up for some spectacular views of the town. Don’t chuck anything off. I lobbed a ten pence piece into the river from it when I was 11 and got the biggest bollocking ever. (Tues-Fri only, 9am-2pm) | Website

Visit a windmill! If the Stump looks like too much of a climb for you, you could give the Maud Foster Mill a go instead. This grade 1 listed building, built in 1819, is one of the largest working mills in the country and a rare example of a five sail windmill. There’s even an adjacent holiday let if you fancied staying the night and aren’t intolerant to gluten. 16 Willoughby Rd, PE21 9EG | Website

Stroll to the sea! Believe it or not, if you stick on your walking boots and know where to go, you actually can walk along the Haven river bank to where the river meets the sea (well, The Wash). A faster and less muddy option might be to instead drive out to have a look at the Pilgrim Memorial – a modest stone statue commemorating the sailing of the Pilgrims to the USA located just next to Havenside Countryside Park on the sea bank. Marvel at the sights of massive ships sailing into Boston as you think, “I forgot Boston was a port town”. Or, if the tide’s out, be amazed anyone would attempt sailing a ship up there in the first place.

Admire some remarkable civil engineering! And that’s the thing with the bloody sea. The tide isn’t always out, is it? When when it comes swooshing up the Haven with the wind behind it, weel – that’s a bit of an issue. That’s why one of the largest flood barriers outside of London was constructed further down the river towards the docks to stop Boston experiencing ever-more-frequent catastrophic tidal flooding, what with all that climate change and that. The £100m Boston Barrier is probably the largest and most impressive piece of civil engineering constructed in the town since someone got jealous at Louth having a slightly bigger church than us in 1309.

Today was crap but I think we can all agree this moment was superb. Genuinely thought when this went in we'd loosen up and go on to win 3 or 4 nil.

This is exactly why I, unlike some in the Boston squad, avoid gambling on football.

I'll be honest: I'm baffled by Elliott arguing over that disallowed goal. I get he's trying to deflect from a woeful performance against very limited opposition, but the officials were bang on.