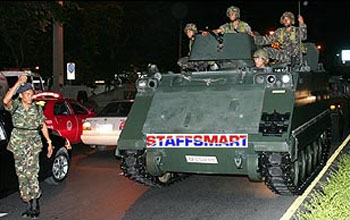 BBC Radio Lincolnshire reported that by 2000 BST Hatfield had barricaded himself inside the Staffsmart Arena boardroom and had already completed the necessary paperwork to send Paul Ellender on loan to Alfreton Town for the remainder of the season.

The Singleton NewsCorpCopter, hovering over the Staffsmart Arena, captured spectacular footage of FIVE passing pedestrians not rising up in protest at the move by the popular kitman, and a furious Crazee Jimmy banging on the front door of the stadium shouting at Jason to let him in.

“Never before has the town witnessed such total indifference to the brutal decapitation of a popular authority figure,” squawked club press officer Craig Singleton as his NewsCopter infrared camera picked out Hatfield faxing Ellender’s loan registration documents to the FA.

United boss Steve Evans, speaking from London, sought to calm the fears of two United fans that his regime had been toppled, telling impsTALK: “I’ve declared a state of emergency. Crazee Jim is at the ground negotiating with Jason. However, I am in control. I may be in London, er, you know, ahem, shopping, but I am in control.”

But with the Ellender loan, and Scott Dalton handed editorial command of glossy propaganda pamphlet Pilgrims Matchday Magazine, the Evans era now seems on the brink of total collapse.

One anonymous Pilgrims chief scout bombarded a little used internet forum demanding to know where his free tickets were going to come from, while several other directors reportedly locked their ties and blazers in a bunker in case fans, spurred on by the coup, attempted to steal them.

Local police constable Bernard Pistolwhip, speaking about the unfolding chaos on a live videolink from Boston Police Station in Skegness, said: “What the bloody hell do you want me to do about this? It’s a fifty minute drive down the A52, and I’m watching Runaway Bride with the missus.”