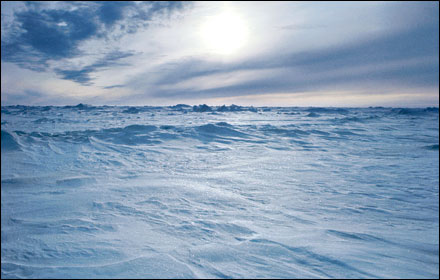 Is there anything more depressing than witnessing a dozen sixteen year-old football fans attempting to out-sing half a dozen twelve year-old visitors, all flailing, pre-adolescent bravado and witless banter?

Having watched this thoroughly miserable scene unfold on a toe-numbing evening of pretty execrable football in Ilkeston, you couldn’t help but feel you had somehow been teleported onto the set of Phoenix Nights. Or, rather, Phoenix Nights: On Ice!

Because in all honesty, this game probably should not have been played. Poking a foot underneath the advertising hoarding revealed a pitch that was about as ductile as a slate-bed snooker table; the deadening thud of the players as they ran about was matched only by the sound of ice crunching underfoot.

Still, it was lovely to be back at the New Manor Ground, a ground that actually turned out to be far more normal than memory served. It had been nine years since Boston’s last visit to Ilkeston in the league, and with the exception of an odd little corner stand and a bit of new terracing, it was all very familiar. Even the Boston United bench had a familiar feel: Micky Nuttell, 62, was in the starting eleven for that game in 1999, and, incredibly, would have an influential role in this game too.

Nuttell’s presence on the bench was certainly a surprise. Injuries, suspensions and all the rest of it meant United were, once again, stretching their squad to the limits. Welsh called upon the services of several teenagers to pad out the bench – lowering the average age of the United substitutes to 42.

To ensure United’s venerable veteran made an appearance, the Pilgrims huffed and puffed ineffectually for 80 minutes, making precisely no headway against strong home resistance, falling behind to their customary early goal after just ten minutes. After twenty minutes, Ilkeston might have had four. As it was, they bagged just one, courtesy of Tom Cahill’s point blank header, and then proceeded to miss a slew of chances.

Micky Nuttell nutted someone after approximately thirty seconds on the pitch, tried to nut the same player a minute later, was spoken to by the referee, kicked, pushed and yelled at another – and riled Ilkeston sufficiently to ensure he was snubbed by at least one member of the opposition at a post-match handshakes

Boston, however, regrouped and responded well to falling behind. Passing around chunks of ice, as the passengers on Titanic discovered shortly before they all died a horrible death, can be quite tricky, so it was perhaps no surprise that the game descended into a frequently sub-pub team festival of pinball, with neither team able to pull off the passing game they were, to their eternal credit, at least attempting.

So, of course, after pie and Bovril, both teams emerged with an entirely different mind-set. It wasn’t pretty, and it was certainly frustrating for Boston.

With the minutes ebbing away and the Pilgrims rapidly running out of ideas, Welsh introduced Mitchell Griffiths for his debut. Griffiths – a popular and promising member of the United youth set-up – was certainly sprightly, but he made little impact. It wasn’t his fault; this wasn’t the kind of game where youthful exuberance could possibly save the day.

It was the kind of game where a Tony Crane lunatic was desperately required. And in Tony’s permanent absence, who better to send on than Mickey Nuttell – the kind of character for whom the word ‘combustible’ was invented for?

The impact was immediate. Nuttell ran on, pissed off the entire Ilkeston team en masse and had created Boston’s only genuine chance of the entire match, retrieving a very deep free kick from a certain goal-kick with his noggin, knocking it across the area for Ryan to smack straight at Garner.

Suddenly, the Robins were rattled. So rattled that ex-Pilgrims boo-boy target Lil’ Thommo decided to fist the ball away from Nuttell in the Ilkeston area in the last minute of normal time.

Ryan stepped up and spanked the spot kick high in the corner to Garner’s left.

It was a beautiful penalty, rounding off a less-than beautiful game.

Man of the match – Mickey Nuttell
Nutted someone after approximately thirty seconds on the pitch, tried to nut the same player a minute later, was spoken to by the referee, kicked, pushed and yelled at another – and riled Ilkeston sufficiently to ensure he was snubbed by at least one member of the opposition at the post-match handshakes. All told, an impressive seven minutes work.