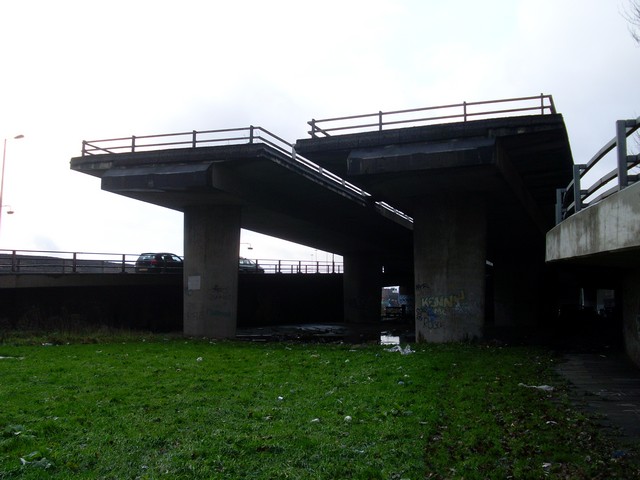 It has been two and a half years since I wrote about the future for the Boston Standard. So last weekend, in a post-Darlington pique, I decided to go take a look at it.

Or at least, the start of it.

You’ll find it a short drive from Boston, down along the old railway, across London Road and up the A16. Shortly after passing the signs for Wyberton and passing the closed Tytton Lane East, you enter the coned-off chicane that funnels angry commuters around a partially constructed roundabout.

There are diggers. Lop-sided fences. Mounds of spoil and rubble. Weeds the size of trees. It looks like my back garden. That being said, the roundabout looks superb. Dropped kerbs and everything.

“FOR THE BENEFIT OF LINCOLNSHIRE” boom the yellow signs, doing their best to persuade infuriated the rush-hour drivers to suck it up for the greater good.

If a grown man making a detour to spy on some roadworks sounds like the kind of thing you’d normally associate with a weird documentary on Five, you’re probably right. But hear me out.

For the majority of motorists, the works are just another miserable obstacle. For Boston United fans, though, there’s something deceptively significant lurking in the unruly forest of cones. If you’re heading south, you’ll see a short section of new road leading away from the new roundabout to your left into what is, at present, an empty field.

It’s that small section of the site I was interested in. Not because of some kind of weird bitumen fetish, but because of what the road signifies, and more specifically where it leads.

Which, right now, is quite literally nowhere. But it’s real; it exists. You could technically walk on it (don’t do that). And as any Pilgrims fan who has read the Quadrant plans will know, the empty field will – as long as there isn’t some kind of disastrous funding hitch – soon be a buzzing construction site of its own.

It’s the site of the new community stadium, and that first short scrap of highway is the very same bit of road over which generations of miserable Boston United fans will travel on their way to watch the Pilgrims lose to an ex-colliery team in the third qualifying round of the FA Cup.

Bothered? No? Think about it: future owners and managers – hopefully the kind who don’t engage in systemic financial fraud – will travel along it. For locals, it will be the gateway to a new state-of-the-art community sports hub. Or the new bar, anyway.

Excited? No? You miserable bastards.

The point is that, as underwhelming as it is, that patch of tarmac is the very first tangible fragment of the future that has always seemed a couple of years away for the best part of a decade.

Over on Facebook right now, on the Boston United Photo Archive, supporters are sharing rare and in never-before-seen photos of the last time the club made any significant investment in infrastructure.

The rebuilding of York Street in the late 70s and 80s was a direct response to the club’s rejection from the Football League, and although it was a necessity to improve the ground, the club didn’t simply mend and make do.

In those old scans, the extraordinary scale of the rebuilding lays bare the naked ambition of the affronted and embarrassed club. The old Town End, a humdrum hump, is swept away and replaced by a huge terrace, workers casually hanging from its skeletal frame.

The Main Stand, its new seats not yet faded by the sun, looks like a stand ready to host League football.

Eventually, it did, of course, but it took nearly twenty years for the new ground to reap any kind of reward, by which time it was deemed out-of-date, and unable to pays its way.

And now, thirsty five years later, it feels like a burden, just as it did prior to redevelopment. Not since the 70s has the need for more investment in the bricks and mortar of the club felt so pressing, so urgent.

And still, the club aren’t quite there yet. The more pessimistic of Boston fans, which is to say every single Boston fan who has ever lived, won’t fully believe the new stadium is happening until the whistle blows at that first game, but at least there is now something we can look, even if it’s incredibly dull and really small, and definitely not something that’s going to end up on Skyscraper City.

Incredibly dull is hardly how you’d describe this new Boston side. Back in the present, meaning last Tuesday, the grumbling started unusually early at York Street.

There were still ten minutes before Boston United kicked off their second home game against Tamworth when the first supporter started opining to his mate about the “absolute shit” on offer. He wasn’t talking about the cheeseburgers.

Has patience run out on the terrace? Perhaps. So as Boston and Tamworth took to the field, the stands were a tad sparse, and some frustrated supporters – we all know the ones – were one misplaced pass away from yelling at a nineteen-year-old kid to retire.

The atmosphere wasn’t exactly toxic, just a bit stale; the whiff of resignation hanging in the air.

For the record, the cheeseburger was decent. The football was better.

Gregg Smith was Tuesday’s obvious man of the match and is the standout new signing. Granted, such has been the state of Boston’s dreadful start that Gregg Smith hasn’t had to do a great deal to earn that title, but on Tuesday he looked every bit a cult player in the making.

Smith plays football like nightclub bouncer patrolling an unruly dancefloor of coked-up students from a shit university. He can’t wait to pile in. It’s terrific entertainment, although you’re inclined to watch him through your fingers, wincing at every tackle he makes.

However, it would be foolish to get too attached to him. This is a team in transition, and trying to predict who will still be here in November – let alone the end of the season – is impossible.

For all the gloom around the club, when they play as they did on Tuesday they are a fun team to watch. Then, on the flip-side, there’s the Boston of the following Saturday – the kind of blindingly ineffective team that saps supporters of any desire to ever watch a game of football again.

That’s what we’re stuck with, for now. So if you’re stuck in traffic down the A16, keep an eye out for that road, and think of what will one day be at the other end.

Or head over to Facebook, and wallow in the nostalgia: look at the birth of a ground we’re about to lose, and think back to the promise of bigger things – never quite delivered – that energised those who built it, and raised money for it. “Not too long ago, there was no future,” I said in 2013.

Well, there it is: a bit of bad road that peters out in an ocean of muck. The future is closer than you think.