Strolling into Matlock Town’s glorious Causeway ground last Friday, it was remarkable how different some things were, and yet also how familiar.

Despite the addition of some electronic scoreboards that look as though they were nicked from some roadworks, it’s a cracking stadium, one where you always end up glancing up at Riber Castle looming high on the hill as you enter, just to check the old structure is as imposing as you remember it (it is).

But this time, it was all a bit different: track and codes at the entrance, bottles of hand sanitiser dumped on a battered old piece of wood, a steward’s welcoming patter including friendly but firm instructions not to stroll past it.

But then the players trotted out and somehow everything seemed right again with the world: the heavens opened, my pie got soggy… and Boston lost

But then all that gave way to the familiar sounds of players warming up and old football friends seeing each other for the first time ahead of a new season.

Except this time the absence has been longer, and the welcomes – socially distanced, of course – doled out with that little bit more warmth. 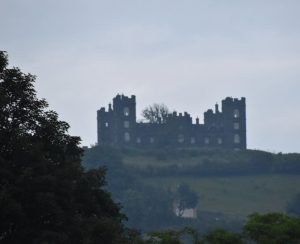 Then, in the bar, it was back to the weirdness – one way systems, masks while stood up, more track and tracing, pints via apps.

Then the players trotted out to applause slightly more enthusiastic than normal, and somehow everything seemed right again with the world: the heavens opened, my pie got soggy… and Boston lost.

There was even the joy of a first football train journey since Rochdale at home, which now seems like it could have been a decade ago. It’s the little things I’ve missed: the couple of train tinnies, a old rattler snaking its way down a rickety branch line, and a bloke (not me) gleefully pissing up a wall at Matlock station because obviously the toilets were shut and train companies in 2021 still think people’s bladders turn off after 6pm.

Bloody hell, it was good to be on the road again, even if the game was, as Craig Elliott warned us, just a fitness exercise. That really wasn’t the point. The point, for me at least, was just to start getting back to some kind of normality. Chucking good money away on a Boston United defeat seems a perfectly natural starting point.

A trip to Matlock, though, was the precursor to something altogether more exciting happening this Saturday. Something we’ve been waiting for now since 2007.

Excited? You should be.

But even then, it’s a new beginning that’ll be, like Matlock, a blend of the familiar and the weird, coming with the sort of caveats we’re now grimly accustomed to at football, or even a quick trip to Tesco. Attendance is strictly limited (and if you haven’t yet got a ticket, bad luck), the club’s hospitality will be out of bounds, and the concourses will be shuttered.

The less said about the original floodlights the better, especially if you were the poor contractor who took that phone call from David Newton.

And – no disrespect to Saturday’s opponents intended here – but if you’d asked most Boston fans months ago who they’d want for the first ever game at the new stadium, very few would have said Lincoln City. Most had thoughts of Premier League opposition, or perhaps even bagging a rare visit from a foreign outfit. Could maybe have got the Bakali Bullets back.

Alas, the world has changed since then and with so much else to deal with, it’s completely understandable this first pre-season schedule in the new digs looks pretty much like every other.

Still, there’ll be much to gawp at for those – like me – who’ve not yet been. You might forgive the staff being used to it by now; it’s easy to forget the ground is actually now nearly a year old.

Ellenders restaurant has been open now for weeks. The original pitch has already been dug up and re-seeded. The original two-stand configuration is now three. Construction work has since started on site again, this time for the new community pitches.

Sure, the less said about the original floodlights the better, especially if you were the poor contractor who took that phone call from David Newton, but they’re back now and they still look like the coolest floodlights in non-league football.

Saturday probably won’t be without its hitches. The world still isn’t quite right and uncertainty still seems to dominate public life. But stood there on the terrace at Matlock, cowering under a roof while shielding my pie from torrential rain and watching my team ship a crap equaliser, I knew one thing for sure: no matter what, football is back – and it’s going to be great to finally go home.

Saturday’s game against Lincoln City has sold out, but the club will be offering a live streaming service – details HERE