THE FAT old hag looked down on me, her eyes staring directly into mine. Well, that was on the occasions where I made eye contact. As much as I tried to fight it, it was almost impossible not to gaze at her floppy, oversized breasts – the bulbous things hidden behind a yellow and blue floral print dress and dumped sloppily on the table before her.

A fag hung loosely from her lips and her packhouse perm made her look like Grotbags had gone for a 1970s Kevin Keegan look. To gaze at the wizened harridan, you’d think she was no oil painting.

Thankfully, this wasn’t a blind date gone wrong, a big, fat lie which would leave me firing off an angry email to Match.com and demanding all my money back.

In fact, life was a lot more normal. As normal as it can get in Berlin. I was sat in Dicke Wirtin, a bar-restaurant along Carmerstrasse, which prides itself on being packed with both character and football fans. The name roughly translates as Fat Landlady, and that Jabba-The-Hut-in-a-wig that caught my gaze was the cartoon logo of the bar – her fishwife face immortalised in a gold-framed painting which hung from the opposite wall.

It was 3.30pm on February 21. It was Saturday afternoon and I was about to get my first taste of Die Bundesligakonferenz.

Die Konferenz is Germany’s answer to Soccer Saturday. But instead of watching the gurning faces of Phil Thompson, Paul Merson and Matt Le Tissier as they rock back excitedly in their chairs, you actually get to see the action unfold. 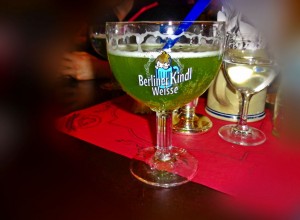 Pictures on the flat screen which hung from the far wall beamed in Bundesliga action from around the grounds. There’s no need to force yourself to stay awake for Match of the Day in Germany, all the moments you want to see are yours – in real time.

“Yes?” asked the waitress as she turned to take my order, giving me a steely look which suggested any attempt to converse in her mother tongue would be a waste of both our time. She was slimmer, younger and prettier than the beastly mascot of the bar, with two spikes of a tattoo creeping up from the back of her T-shirt and along her neck, suggesting there may well be a more fun side to her when she’s off the clock. But while she was at work there was no chance of raising a smile.

As the action kicked off with Schalke versus Werder Bremen I ordered a weisse bier with woodruff sauce, eager not to be the only one on my table missing out on what our local hosts had told us we must try.

In between Joselu handing Hannover 96 the advantage at Koln and Josip Drmic putting Bayer Leverkusen 1-0 up at surprise package Augsburg, I was using a straw to sip some green potion from what appeared to be the campest cocktail glass in the whole of Germany. Sure enough, my drink tasted of white beer, but the sauce which had brought the colour to my glass added a bizarre tinge which was disturblingly melon-like. Disturbingly as woodruff is a sweet-smelling herbaceous plant.

“Fuck them,” declared Lars in a voice loud enough to share his dissatisfaction with those tables around us as Immanuel Hohn gave Freiburg the lead against Hoffenheim. “Nobody in Germany likes Hoffenheim, because they are a village team. They are a fucking one cow and a one duck village.”

Hoffenheim’s rise through the German football pyramid to the top flight has clearly irked Lars, particularly because the investment of software entrepreneur Dietmar Hopp has created a club that is now playing at a level he doesn’t believe its fanbase deserves (Hoffenheim averaged more than 26,000 for home games last season while hailing from a village with a population of 3,200). “The only team we fucking hate more than Hoffenheim is fucking Leipzig,” Lars adds as he slams his beer down in disgust at how Red Bull’s money is giving one club in Saxony the wings to fly up Germany’s pecking order.

I met Lars for the first time the previous night, in which he and his friend Oli took us on a tour of Berlin’s bars. He was a Lubeck fan, no, a Lubeck obsessive – his T-shirt and rain jacket gave that fact away on first sight. And I couldn’t help but wonder if he would react in the same way were a benefactor’s Euros to bring his club a promise of swift success.

I didn’t ask him. I didn’t get the chance as he continued shouting ‘fuck’ at the screen every time one of Hamburg’s rivals in the relegation battle conceded. Lubeck is a town and a club very much in their neighbours’ shadow, and it seems that even Hamburg’s once-mighty team are worse than those nouveau riche clubs in the eyes of a Lubeck fan. 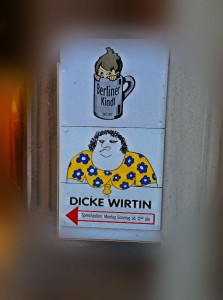 ‘How many?’ became the next game shared throughout the room as Robert Lewandowski beat a particularly feeble offside trap to give Bayern Munich the lead at Paderborn. The runaway leaders were enjoying ripping opponents apart with regularity, and friendly bets were being made now those floodgates were opened.

“Four. Fucking four. Always,” chipped in Lars. The others around us had similar ideas. Four, five or more being the most regular suggestions in a room where nobody seemed to think scoring three or fewer was a triumph for Pep Guardiola’s reigning champions.

But by then my mind was on the Berliner Plate in front of me – a bizarre buffet of meat and veg. One roasted pork chop, half a sausage and a solitary meatball – each covered in their own sauce – sat on a plate so oversized Alan Partridge would have been jealous. Although perhaps not of the salad, beetroot and potatoes which accompanied the feast.

Dicke Wirtin may not appear to be the archetypal place to watch football at first glance. Brass plates and assorted crockery hang from the brown slatted walls which make up the several smaller rooms beyond the bar area. But its compact nature means you were never far from debate.

Collectively, we gasped as Mainz completed their turnaround to beat Eintracht Frankfurt 3-1, and laughed as Augsburg keeper Marwin Hitz was beaten by a firm enough deflection to steer Bayer Leverkusen midfielder Stefan Reinartz’s speculative strike beyond his reach to make it 2-1 – adding insult to injury after an earlier fumble had allowed Drmic in to open the scoring.

The room chuckled knowlingly as Munich continued to find the net, until their fourth went in. Then it was just groans. Germans appear to accept the Bavarians’ dominance with a sense of gallows humour, at least until it is percieved that they have started taking the piss.

The young couple in their distinctive green Bremen scarves had hardly shown any emotion since the action kicked off. Their team’s goalless game appeared to be bypassed for more interesting occurrences everywhere else. That was until they slumped back into their chairs when Max Meyer fortuitously put Schalke in front with less than half an hour to play.

Saturday, 3pm continues to have a near-religious stranglehold on football in England. No live action can be televised due to the fear that it would prevent the crowds turning out to support their teams in favour of a cheaper afternoon on the sofa.

But things are different in Germany, where a historical kick-off time does not have the same power. Their lower league matches are played out on Friday evenings or Sunday afternoons. Perhaps that’s easier in a country almost three times the size of Blighty where fewer supporters have the time or means to travel greater distances for away matches.

Die Konferenz however, does create an atmosphere and a sense of occasion. Together you can cheer the highs and consolidate the lows, and you don’t have to spend five minutes watching Alan Shearer skirting around condemning anyone before the next lot of action.

Then suddenly a cheer to our left as the Bremen supporters held their scarves aloft. Sebastian Prodl headed them level two minutes into time added on. Finally, something for them to justify the afternoon in the pub, if ever that was needed.

But the best was yet to come from Hitz, Augsburg’s previously hapless keeper. Four minutes into stoppage time he had sent himself forward as his team looked to salvage something from the game with a late corner. And as Leverkusen allowed the ball to pinball around in their penalty area, Hitz – who had opted not to scarper back to his own unguarded net – was on hand to prod home a close-range leveller on the swivel.

The collective laughter from the bar was louder than Lars’ most voiciferous ‘fuck’, saved for when Hoffenheim equalised through Kevin Volland’s 30-yard screamer, and pretty much everyone’s pained groan when Munich struck their sixth and final goal.

Perhaps the mood would have been different had Hertha Berlin’s 2-1 defeat at Wolfsburg been inflicted during that afternoon. But I watched that game the following day in an FC Union bar, where no tears were shed for their rivals.

Die Konferenz and Dicke Wirtin may be stranger bedfellows than David Hasselhoff and Germany’s pop music buying public, but together they had conjured up an afternoon of green beer, weird platters, goals, glory and last-minute redemption.

And through it all the Fat Landlady sad motionless, her forlorn face giving nothing away. We had laughed, cried, cheered and sworn profusely, yet she couldn’t even crack a smile. Her fag still burned. Her breats remained slumped on the table. For her it was just another Saturday in Die Konferenz.