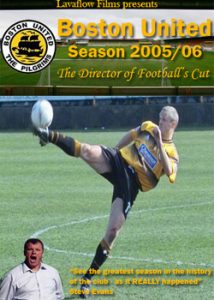 All new from Lavaflow films, a review of the Pilgrims all-conquering 2005/06 season re-edited and digitally enhanced for TRUE SUPPORTERS, including newly recorded commentaries by Scott Dalton and Michael Horton, both with loaded guns held to their heads.

Look back on the greatest season in the club’s history, including highlights such as:

‘Playercam’ feature allows you to follow Daryl Clare’s touchline warm-ups for the three games he was named on the bench for before leaving again.

Archive footage of ALL the 2005/06 press conferences, including the legendary “That’s it, I’m not going to sponsor you any more”

Special exclusive Featurettes, including:”That’s that tw*t Isaac” – Behind the scenes at a Fans Forum

“He kicked it, and it ended up in the back of the net” – BUFC Chief Scout Gee Evans demystifies the complex world of football tactics and the intricacies of scouting