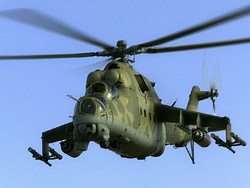 Boston United’s future as a Football League club is under threat before a ball has been kicked as the Football Association’s Compliance Unit launched an audacious raid on the club’s Spayne Road offices today, killing nine innocent bystanders.

The raids were launched after the FA discovered evidence of serious contractual discrepancies involving up to six United players. Compliance Officer Graham Bean ordered his crack team of Special Forces to move on the club at 0800 this morning in a surprise attack that caught general manager John Blackwell by surprise.

Important Boston fan Bob Mugfret-Fishhead was passing the offices when he saw a barrage of missiles from an Apache helicopter gunship destroy the front of the shop.

‘Troops moved in soon afterwards and led a stunned John Blackwell away at gunpoint,’ Mugfret-Fishhead said. ‘It seemed the soldiers were really looking for someone else. One asked me if I’d seen a shortish Scotsman with an attitude problem loitering around.’

Blackwell was released by the FA a short while later and was quick to play down the incident. Speaking to impsTALK amidst the smouldering rubble of his office, Blackwell claimed the FA had merely been making a courtesy visit.

‘Mr Bean and a few of his friends simply popped round for a cup of tea,’ Blackwell said as he nursed his broken neck. ‘This mess…. Well…. The kettle needed de-scaling. I’ve been on at Maureen for weeks about that.’

Paul Bastock was taken from his house by helicopter and was still in FA custody at the time of going to press. Steve Evans was not returning calls made to his mobile, although a family friend claimed that Evans had fled to Columbia with Pat Malkinson, who is believed to be next on the FA hit-list.

‘Yes, Steve and Pat have taken a few days off together abroad,’ Blackwell confirmed. ‘They will return just as soon as the heat is off them. We must move quickly to silence the remaining witnesses, but perhaps I should not have mentioned that to you