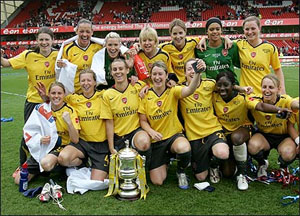 They’re a national laughing stock. The butt of a billion jokes. Shapeless, tactically naïve, technically deficient; unable to pass, trap, head or basically kick the ball, while playing at a pace that even an exceptionally lethargic glacier would find excruciating.

Sadly, Derby County haven’t given their fans much to cheer about over the last ten months. In fact, they’ve not really given them anything to smile wanly about.

Take a short drive down the A52, however, and the red half of this Midlands conurbation is having a right old time of it. Having luckily sneaked into the last remaining automatic promotion slot courtesy of Carlisle and Doncaster’s admirable efforts to trump each other in the spectacular implosion stakes, Nottingham Forest fans flooded the pitch on Saturday after the final whistle (note to Stoke City fans – after the final whistle) to celebrate their elevation to the Championship.

Nigel Doughty, Forest’s unfathomably wealthy benefactor, stubbornly refused to get too carried away, grumpily waving away the leering goons brandishing champagne and promptly declaring that even being in the Championship was ‘embarrassing’ for a club that rightly deserved to be in the Premiership – presumably because it has a big ground with a funny roof and boasts some of the most deluded fans in the northern hemisphere.

Much to their obvious irritation, the more Neanderthal elements of Forest’s support were prevented from joining in the on-pitch celebrations by a pre-planned defence mounted by stewards that made the Third Reich’s Atlantic Wall look like a rusty chain link fence. Those supporters unlucky enough to have purchased tickets in the infamous A Block would have found it easier to dodge their way onto Utah Beach. As the public address system boomed out commands to stay off the playing surface, the sentiment of the A-blockers was summed up nicely by one frustrated wannabe head-cracker: “Fuck the playing surface! There ain’t no more fuckin’ games, you daft twats!”

Except, of course, he was wrong. There was one more match to be played on the City Ground’s beautiful, pristine bowling green surface: the Women’s FA Cup Final between Arsenal and Leeds United on Bank Holiday Monday.

Despite Mark Arthur’s soothing overtones celebrating the ‘wonderful link’ between Forest and the FA and all that celebratory nonsense, Nottingham Forest fans were, as usual, pretty scathing about the fact that their stadium was being used to host such a tinpot game. Many found the very concept of them attending the final utterly laughable. So, adopting my most sanctimonious, right-on, condescending attitude of pure, unadulterated smugness, I decided I would go. At £5 a pop to watch 22 players, two goals and a football on a glorious day on the banks of the Trent, why wouldn’t you?

For all the mirth and derision ladled onto the women’s football, the problem inhibiting the development of the game, at least in the modern sense of a marketable product, is not so much the blinkered hostility from the terraces.

No, what really stifles the attraction of the domestic game is the extraordinary lack of competition. How the women would love to be bemoaning a top four. Right now, there is a top one: Arsenal.

Arsenal are a club that offers hope for the future while simultaneously squeezing life out of the present. Here is a team that showcases the athleticism and technical ability that many still erroneously deem our finest female football players incapable of.

But their dominance is telling and betrays the lack of equality and a talent pool that is still desperately shallow. A brief flick though the teams’ respective routes to the final was telling. Arsenal’s run included an 11-1 win over Newport, an 8-1 duffing and two 5-1 wins in the latter stages. Frankly, no-one had got close to them.

In contrast, Leeds had scraped through three of their ties on penalties. It looked an utter mismatch. Even the next best team – currently Everton – are light years behind Arsenal, leaving the women’s game in an uncompetitive rut from which it is desperately struggling to escape. Kevin Keegan would have a field day.

When the final of the FA Cup, live on BBC One, kicked off, it swiftly became evident why. Arsenal were good. Very good. Stocked with players blessed with genuine technical ability, they were able to breeze past defenders at will, dispossess midfielders with consummate ease and could ping the ball around with the confident air of their male counterparts at the height of their powers.

They knew how to exploit the wide, green expanse of the gorgeous Nottingham pitch to slice apart Leeds. They should have been four goals ahead by half time, but a quite stunning performance by Leeds’ goalkeeper Carly Telford kept the Yorkshire side level at half time. It seemed improbable that they would survive the second half unscathed, and so it proved.

The collapse, when it eventually happened, was swift and emphatic. Arsenal scored three goals in six minutes shortly after the restart and the game, effectively, was over as a contest. Kelly Smith, Jayne Ludlow and Lianne Sanderson scored the goals, and although Leeds scraped a consolation, Arsenal popped in a fourth and wrapped up their latest cup triump more than comfortably.

After the game, Vic Akers, the Arsenal manager, protested that the FA Cup Final should be played at Wembley. “If all the men’s finals and play-offs are at Wembley, they should fit this big day in the calendar,” he grumbled. Not yet. There is little prestige in playing before a stadium that is two thirds empty, and nothing – least of all a cavernous, vacant Wembley – beats a glorious day on the banks of the Trent.