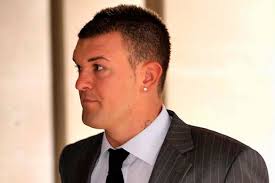 The news this week that the contract of Boston United keeper Ashley Timms had been terminated by ‘mutual consent’ – a classic football euphemism commonly deployed to make it sound like everyone shook hands and parted amicably rather than flipping each other the finger – probably shocked some Boston supporters.

Not because the club had lost the services of a talented keeper of course. It’s more likely that some supporters had assumed he’d left months ago. Many players come and go, of course, but Timms arrived with a colourful past, to put it mildly. It was a past that suggested Boston had signed a player prone to errors of judgement, but who might yet turn his career around and become the success he had once promised to be.

You can certainly see why Dennis Greene was tempted to recruit him. In the event, his career at York Street lasted 17 games, and was to end in the miserable, abject fashion many predicted it would. It is a departure tinged with regret. Regret that Timms couldn’t, or wouldn’t, reboot his career with Boston. Regret that the Pilgrims have lost a keeper who still retains, even at the age of 28, the potential to be one of the best in non-league. And in many ways, regret that the club has wasted a chunk of its budget that could have been put to more productive use.

Of course, in cases like this, hindsight can be used as a stick to beat those who take gambles.

Does failure mean clubs like Boston, whose place in the football pyramid dictates that they represent the last chance saloon for failing and fading talent, shouldn’t at least try to turn around players who have drifted to the point where their careers make Michael Barrymore’s look positively meteoric? The rewards are obvious. In the Conference North, talented individuals can influence games to an extent not seen at higher levels of the game.

Witness the extraordinary impact of the much-improved Ricky Miller since his return to Boston and you can see why managers might be tempted to take risks with equally skilful players who, unlike Miller, arrive with dubious temperament and a less-than exemplary reputation.

Watching Gascoigne in a pre-season friendly against Newcastle was an extraordinary experience. Here was a timeworn legend, his gaunt and serious features far removed from the tabloid splashes of old. No glitz, no Five Bellies, no dentist chairs or drink – just a middle aged man once known as Gazza who couldn’t really run, his touch a little ragged but who still managed to be superior to every other player on the pitch

Some will contend that the rewards aren’t worth it. Not worth the risk of unsettling the squad, they’ll say, and they do have a point. Negative behaviour on the training pitch and in the dressing room, if left unchecked and allowed to metastasise, has a ruthless tendency to topple clubs and managers.

But therein lies the crux: if a strong manager, with the majority of the dressing room behind him and an understanding chairman to lean on, is able to manage capricious egos and excise them should things take a turn for the sinister, then why not take a punt? After all, Boston United’s bank balance notwithstanding, the only real loser here is Ashley Timms himself.

That said, some will rightly point to his disastrous performance at Brackley, the game that effectively ended his time at the club, as evidence that Boston’s United’s play-off hopes were damaged too. Not irreparably, but damaged nonetheless. Sometimes, gambles can be more cynical and clubs can use troubled players for their own gain.

When Steve Evans signed Paul Gascoigne a decade ago it was a signing made for publicity purposes rather than in the genuine belief that the faded capacities of the once-mercurial midfielder would propel Boston United to the promised land of eighth in League Two.

That’s not to say there spark had entirely gone. Watching Gascoigne in a pre-season friendly against Newcastle was an extraordinary experience. Here was a timeworn legend, his gaunt and serious features far removed from the tabloid splashes of old. No glitz, no Five Bellies, no dentist chairs or drink – just a middle aged man once known as Gazza who couldn’t really run, his touch a little ragged but who still managed to be superior to every other player on the pitch.

Gazza pinged the ball around with microscopic precision and Boston won 4-0.

But Evans didn’t want goals, or mazy runs or the odd flash of the flair player of the early 90s. A marketing man, he wanted Boston’s name in the papers and on the news. This gamble paid off handsomely and Gazza’s new club was, for a few brief weeks, firmly in the nation’s spotlight for football reasons. For Evans, a man desperately needing positive publicity for the club and himself, it was a perfect outcome.

It is true that Gazza’s last meaningful contribution in English football occurred in a Boston United shirt but in truth the existence of the famous name on the squad sheet was a stunt, a football trope – a billboard for Boston’s ill-fated ambition of the time. Just a few weeks later the peroxide haircut was gone, as everyone expected.

It was, supposedly, because he wanted to become a coach, but the truth didn’t really matter. Boston had their positive publicity. And besides, did anyone truly believe Gazza’s troubled off-field life could be rehabilitated by being sequestered in Lincolnshire? That’s not why he was signed. More recently, Boston attempted to reverse the decline of Tony Crane, a stocky defender with a ludicrous amount of ability. That such a capable player, once seen as a rising star, even ended up at York Street in the first place told the whole story.

The itinerant Crane had been on a downward spiral since his release from Sheffield Wednesday and although his time at Boston saw him score some important goals and become something of a cult figure on the terraces, he soon turned into the kind of liability every manager dreads.

His stint came to a premature and ugly end, much to the evident exasperation of then-manager Tommy Taylor. Predictable? Perhaps. But he served a purpose.

For Timms… well, that’s that. The performance at Brackley alone betrayed a player bereft of the confidence and determination needed to perform to his potential, and thus his time in Boston is condemned to be remembered only in forgotten charts. Paul Bastock’s legend remains safe. Maybe it just wasn’t meant to be. Maybe he’ll kick start his career elsewhere. Maybe he won’t.

But it was a risk worth taking.

This article originally appeared in the Boston Standard