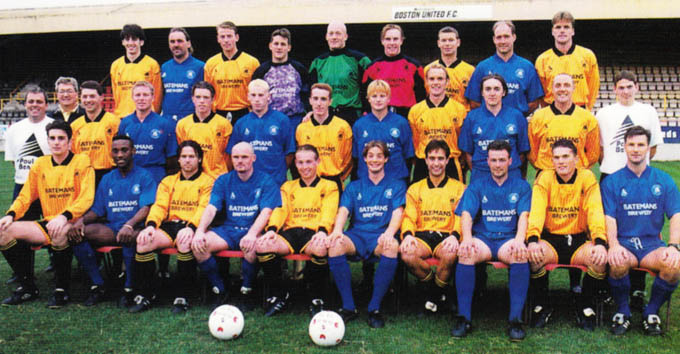 Once, many years ago, a time so distant that John Major was still Prime Minister and teenage boys were playing Cannon Fodder instead of Call of Duty, there was a young Boston United midfielder by the name of Simon Armstrong.

Younger fans may never have heard of him, and why would they? He wasn’t brought back to York Street as a club legend, nor is his legacy revered like that of Chris Cook or Paul Bastock or Michael Proctor.

Except, that is, inside my head. I loved Simon Armstrong. I remember the first time I saw him play, in some long-forgotten fixture in the late summer of 1996. Rakishly thin and boasting teddy boy sideburns that could kill a punk stone dead at 20 paces – sideburns I tried and spectacularly failed to emulate – the Skegness Grammar School pupil didn’t look much like your average Unibond League player.

That’s mainly because he wasn’t your average Unibond League player. He was, with respect, rather more refined than that.

Armstrong’s trademark style was pure old school winger: he’d put his head down and embark on mazy touchline-hugging runs, to my delight and a more widespread despair. He’d skip past lunging tackles, wrong-foot defenders and nutmeg his way down the wing with such verve and flamboyance that opposing fullbacks may as well have been electricity pylons.

That was when it worked. Sometimes his runs would be exercises in extreme futility, perhaps running the ball out for a goal kick or ceding possession to the kind of borderline obese, physically violent middle-aged bouncer Knowsley United used to bring. And when that happened, as it did more frequently as the bone hard pitches of August turned into wintery quagmires unsuited for wing wizardry, the verdict from the main stand would be instant.

Armstrong would have heard the shouts, but he didn’t react. Not for the rest of that game, nor the next, or the one after that. Indeed, after the first few weeks of the 1996/1997 season, Armstrong had started to attract attention from much bigger clubs.

There were rumours Manchester United were interested, their interest further piqued by his pedigree as an England schoolboy international. No doubt even Lincoln City sent a scout, back when Lincoln were quite good. As I say, this was a long time ago.

Armstrong eventually won a move to Port Vale but failed to establish himself in their first ream. He returned to Boston and played across town at Tattershall Road, scoring a memorable solo effort some Town fans still talk about, before vanishing off the radar.

His raw ability still left a lasting impression, however, and I was reminded of him last weekend while watching another young Pilgrims midfielder impress with his technical ability. Unlike Armstrong, Junior Konadu is not a local boy, commuting instead from the south-east. But, like his 90s counterpart, Konadu’s game is based on a deft touch and tricky feet that marks him out as a special talent in the congested midfields of the Conference North.

Not that you’d think so from the furrowed brows eying up the player with deep suspicion from the sidelines, instinctively sceptical of a young man seemingly determined to ruin their day at the football by attempting to play football.

Listening to supporters during and after the game, the parallels with Armstrong were uncanny, the same words used to describe Konadu as were used 20 years ago. He is, they say, too fragile. A lightweight. A one trick pony. A luxury that a team with promotion aspirations can’t afford. A liability, even.

In some ways, it’s understandable. We’ve all played football with that bloke – the bloke with the step overs, the dragbacks, the Powerleague rabonas. I get it. I hate those people too – although in my case it’s simple bitterness, since I’m so bad at football I was once dispossessed by a tree.

But I saw none of that infuriating selfishness in Konadu’s game. I saw a player cherishing possession, creating space where there was none, looking for teammates making clever runs and – with the odd exception – finding them with passes so incisive he immediately looked too good to be true.

Perhaps he is: it was just one game after all, and, frankly, Stalybridge were fairly charitable opposition. Even so, his man of the match performance on Saturday still wasn’t enough to win around the detractors, the inference being that Boston United would instead benefit from a more industrious player in that position; perhaps a bigger bloke prepared to put a boot in, chase down lost causes, shove a few people out the way, preferably with his elbow.
Less Lionel Messi, more Martin Filson – the suggestion being that these types of players are somehow more valuable. They won’t give the ball away, they don’t get out-muscled. They win the headers and the knock downs.

But there is another, more tenuous claim – that somehow players like Konadu don’t have the essential attributes of a decent footballer: desire, character, spirit and a ‘never say die’ attitude. I think that’s nonsense and in fact betrays a kind of football conservatism that has hindered the development of young players in England for too long, and not just at a coaching level, where slowly – glacially so – attitudes are being changed.

Supporters, too, have an influence. Perhaps more than they actually realise, because when a crowd of grumpy, perpetually unimpressed blokes are waiting, arms folded and insults at the ready, for a player to make a mistake, it is little wonder that many of the most talented footballers are struck by a kind of paralysis, too frightened to play the football they happen to excel at.Instead, they are hounded and derided, shouted at for trying to overplay, while players who boot the ball over the stand and into the car park are lauded.

That said, the perennial argument about players like Konadu struggling on heavy pitches is a valid one.

Even Andres Iniesta would struggle to make an impact at Kendal on Boxing Day, but that, if nothing else, is a compelling argument for the widespread adoption of 3G pitches in non-league football. Where there isn’t the money to invest in ground staff, we need to redevelop facilities to allow football players to do what they do best – play football.

Beyond that, we supporters should reflect and revise our own attitudes and prejudices too, to learn to love the players who take risks and try the impossible, the flying wingers and midfield maestros, the players who can open up games with one flick of a boot.

And with three games to go, with the pitches drying out, tensions high and nerves frazzled as a wonderful Skrill North season reaches a dramatic climax, that one moment of magic might just be the difference between a play-off spot and the season ending at Worcester. Let’s celebrate, not criticise, players like Konadu.

And Simon, if you’re reading – how DID you grow those sideburns?

This article was first published by the Boston Standard