Quite Remarkable Service Stations of the Nation: Leicester Forest East 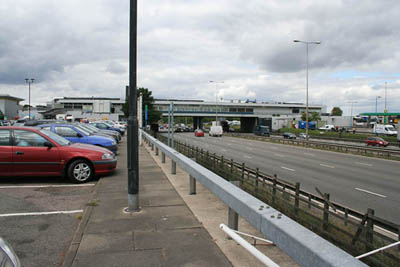 Quite Remarkable Service Stations of the Nation: Leicester Forest East

Oh, and the National Space Centre.

That’s right, you didn’t misread that. The National Space Centre – surely the most pointless organisation in the United Kingdom after the Cumberland Pencil Museum and Woolworths.

Thanks to the pusillanimous lack of forethought and ambition seemingly virulent in our bankrupt nation, our involvement in the most awe-inspiring, swash-buckling, pioneering interplanetary explorations of our time seems to extend no further than bolting a slightly modified can of Cost Cutter baked beans to an ESA probe, pointing it in the vague direction of Mars and jolly well hoping for the jolly best, and then expressing polite surprise when the jolly thing jolly well crash lands on Pluto.

Drivers haring down the M1 at 120mph in the fast lane might be slightly startled, then, to encounter big brown tourist signs compelling them to leave the motorway to enjoy the space centre. Those fools who heed the advice succeed only in missing out on one of the greatest motorway attractions in the Western Hemisphere; an enchanting place of majesty and magic. And there’s not a rocket in sight.

For between junction 21 and 21a of the M1, sitting directly above eight lanes of thundering tarmac, you find Leicester’s saving grace; its raison-de-etre, if you will…

You’ll find no environmentally-friendly gourmet food here. No hand-reared croutons or organic lentil burgers. The fast-food could well be flown in from a foreign factory where it is half-heartedly slapped together by a Ugandan drug cartel – who knows?

The facility opened in 1966, its design based on a chic Italian original. The main part of the service station is based on a bridge that spans all six lanes of the M1 motorway, and it’s in here that Leicester Forest East once boasted a silver service restaurant designed by none other than Sir Terence Conran. It was, according to the wonderful Motorway Services Trivia site, called The Captain’s Table and motorists were served by waitresses wearing sailor suits.

For some reason, and we have no idea why, The Captain’s Table closed many years ago.

So, where once unfortunate women shuffled around awkwardly while being groped by truckers, today gangs of hooded malcontents now gather to gauge whether they could possibly hurl a large object through the window on the traffic below. And many years ago, they could, for the restaurant had doors which led out onto an open-air balcony, from which families could gaze down at the traffic below. Of course, traffic was much lighter in those days, so a passing lorry held the same kind of mystique as the Flying Scotsman. Not so in the 21st century however, and with the advent of Broken Britain, the fact that the balcony is now closed to the public has probably saved hundreds of lives.

The restaurant itself, of course, is long since gone. In its place is now a Welcome Break canteen-style food court where you can pay huge amounts of money for a bit of week-old lamb, purchase KFC box meals that should by rights feed a family of four for a month or visit Burger King for chicken burgers smeared with gloop that may or may not be mayo.

You’ll find no environmentally-friendly gourmet food here. No hand-reared croutons or organic lentil burgers. The fast-food could well be flown in from a foreign factory where it is half-heartedly slapped together by a Ugandan drug cartel – who knows? The closest thing you’ll get to locally-sourced nutrition is the large gloopy adolescent gob in your Zinger Tower burger. And there’s not a damn thing Barack Obama can do about it. It’s brilliant.

What makes Leicester the quintessential service station is that it is, quite simply, the benchmark against which all other service stations must be measured. It ticks all the boxes. And we mean all of them:

– You want an eight item Big One breakfast for £7.99? Check!
– A fridge in which you will find the entire Ginsters range? Check!
– Starch-laden snacks so loaded with complex hydrogenated fats as to leave you in a somnolent trance as you head south towards Milton Keynes? Check!
– 850-calorie panini that tastes suspiciously like latex? Check!
– Coffee that has the consistency and carcinogenic lethality of Brent crude? Check!
– Cash machines that charge YOU £1.85 for having the AUDACITY to inconvenience THEM with requests for YOUR own fucking money? Check, check, checkity check!!

Yet this classic eatery is under threat. There are long term plans to widen the motorway beneath Forest East which would, sadly, signal the end for the bridge design.

Get there while you can.

Related Links [UPDATE 2022: they’re all fucking fucked and I can’t be arsed to fix them]

Have you got a particular favourite service station you’d like to see feature on these pages? Then e-mail impsTALK with ‘YES! I’VE PAID £58.99 FOR A DEEP FILL EGG AND BACON GINSTERS SANDWICH TOO!’ in the subject line, and we’ll either follow it up or ignore you and pretend your e-mail ended up in our spam filter in ‘error’.