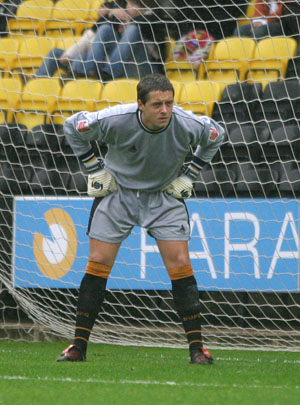 Who the hell is he?
Luke McCormick is a goalkeeper from Coventry. Yes, yes. Coventry. Don’t let that cloud your judgement.

Why did we want him?
Signed as cover for Nathan Abbey, who suffered a finger injury just after Evans told Paul Bastock to fuck off and die. McCormick made his debut for Boston United in the defeat against Notts County.

What the boss said
“I am indeed grateful to my long-term mate Bobby Williamson. I have seen Luke play on a number of occasions last season as he helped Plymouth win the league championship. I am confident that Luke McCormick will be an adequate replacement”

Was he any good?
Yes. Not that he had much of an opportunity to show off his obvious talents over his whole two appearances.

What happened to him after he left?
McCormick is now firmly established as Plymouth Argyle’s number one and is generally regarded as one of the best goalkeepers in The Championship.

(EDIT – The above was written prior to McCormick’s involvement in a pretty terrible traffic accident on the way home from David Norris’ wedding, an accident so awful that not even we’re going to attempt to make light of it)

Do you want to nominate a no-name kid who showed up for three minutes before being recalled by Ipswich Town? , with ‘Yes! I’m Matt Dickens!’ in the subject line to suggest a player

I'll keep pushing this - if you aren't off to Southport @bostonunited fans then pop down to the Longwater and come and see what this great club is all about! 💚🧡🖤

➡️ A massive local derby down at the Longwater on Saturday...

Got the impression Cully was quite keen on binning him off after Tuesday's performance!

Chester up to third after this. Four points separating the top five.

Absolutely infuriating we're not up there with 'em.

All three points locked in for Chester 🔒

A mix up between the goalkeeper and defender sets up the simplest of finishes for Charlie Caton.