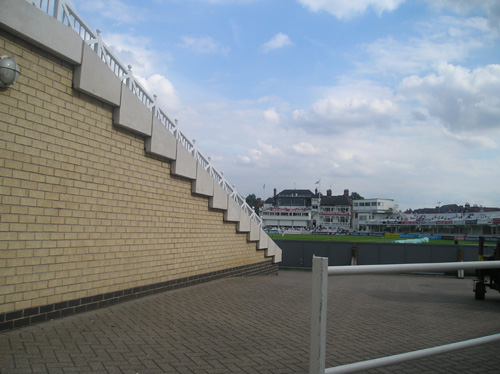 Not football, writes Adam Hildred, as if it matters, but still a crap view… I thought I had it somewhere but only just noticed it going through Picasa again…

Now that the Radcliffe Road End has been built at Trent Bridge, some of the seats in the old (1990!) William Clarke stand are, urrm, what you might say “restricted view.”

I’m not sure if they ticket these seats for big matches anyway, but for county games you just pay ground entry and sit where you want.

Anyway it was the first day vs. Kent in the 2006 County Championship – and hving found my way through Cricinfo’s jungle/archive that would have made it 22nd August 2006. Entry to championship days is £13 now so probably £12 then.

As it happened reigning champions Notts steamrollered Kent in this match and having played poorly for the start of the season looked to have just about dug themselves out of relegation worried. The only way Notts could contrive to get relegated was through a series of shocking batting collapses leading to heavy defeats with next to no bonus points.

Naturally, this is what followed. England had finally replaced hapless juggler Geraint Jones with rightful #1 Chris Read of Notts. The crux of the pro-Read arguments of Notts fans had been that “he can actually catch the ball” – which was unfortunately not true of David Alleyne, his reserve at Notts, who filling in in the last match dropped a crucial catch that would have saved Notts from relegation.